Security Guard vs. Security Officer: What is the Difference

A security guard vs. security officer — what even is the difference? Isn’t it all just the same thing? After all, they both sound really similar, so they probably perform the exact same tasks and duties. Right? The short answer is — no, absolutely not.

If you’re putting together a team or training hard to get into security, you need to understand all the subtle differences between the two professions.

So without further ado, let’s jump right into it.

Who Is a Security Guard?

Security guards are people who patrol the premises and literally stand guard. They are usually stationed in one area, and they’re supposed to report any sort of suspicious activity or movement.

Guards will send all of that important information to either their clients, companies or their supervisors. Also, guards are the ones who will be assigned to areas that are deemed as vulnerable.

Essentially, security guards are the face of a business. They’re the people that clients or customers will see every day and who they’ll interact with. That’s why training security guards in interpersonal relations is key. What’s more, if you want to be certain that a security guard is the right person for the job, you would have to evaluate them beforehand.

Who Is a Security Officer?

Unlike security guards, officers have a ton more responsibilities and duties. They’re not the ones who’re going to be on the ground every day, standing or patrolling. Officers have to assemble teams, come up with security strategies, and establish weak points.

Often, security officers assume a management role, which is why they have higher rank. With that, of course, also comes with a significant pay raise, but more experience too.

Another major difference between guards and officers is that the latter are always on their feet. They never stand at just one single point, checking for threats. Officers are always on the move and on the lookout.

Essentially, guards will do everything in their power to ensure that a threat never even happens. They’ll do all the necessary prep-work and research in advance, and secure every point that they deem weak.

One more duty that almost every officer has is training. They’re usually the ones who are in charge of training their subordinates, which, in this case, are security guards. Here’s what that job entails.

Training to Be an Officer vs. a Guard

Even though a security guard’s and officer’s jobs are basically night and day, they do both have one thing in common — training. No matter the position, both professions require a ton of hard work and dedication. But as you can imagine, the training sessions look a bit different.

If you want to have a crack at becoming a security guard, you’ll most likely need to perform a standardized IQ test. Of course, you’ll also need to do a fitness test to prove that you’re in proper shape.

As far as your education goes, most EP companies don’t require you to have anything beyond a high school diploma. However, that might vary from one company to the next, so make sure to check.

Some of your duties as a security guard will most likely include:

With all that said, if you want to become a security guard right now, there’s almost nothing stopping you. You don’t need any previous experience, just some basic skills, and a lot of determination. 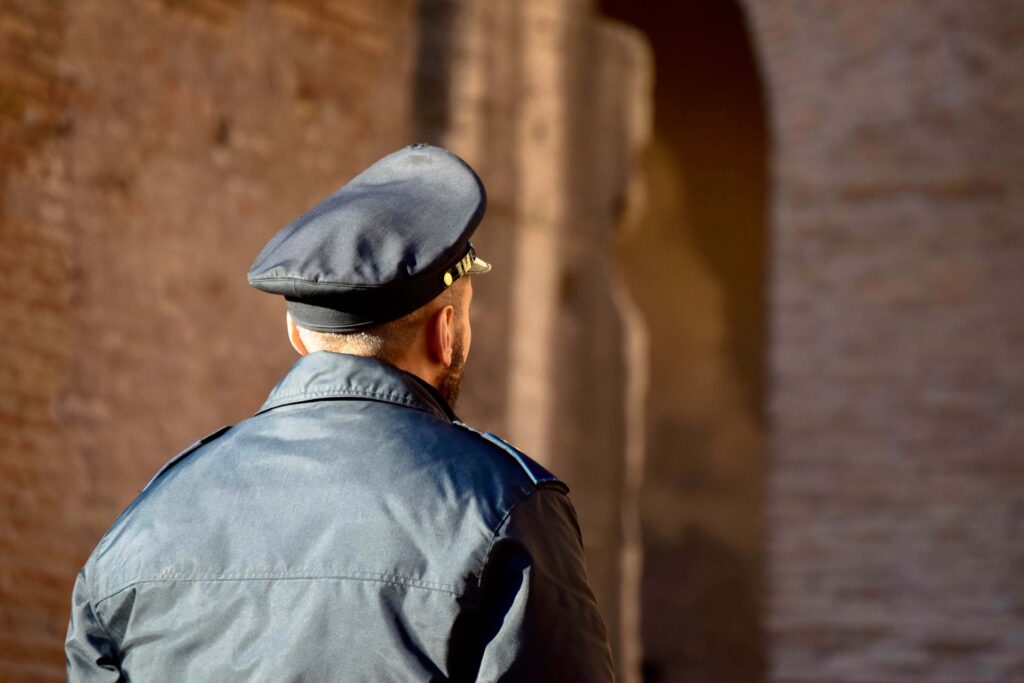 Training to be a security officer is a lot trickier than it is for guards. Your job will be to manage, oversee, plan, and execute countless different strategies, which, as you can imagine, takes a lot of skill. That’s why there’s such a huge gap between a security guard vs. security officer.

You need to be trained and certified in a wide variety of different security services. Some of the essential things you need to know to become an officer include:

Of course, depending on who they are and what they do, your clients might require you to have a specific set of skills. In that case, you’ll need to train some more or you might lose the client.

If you’re looking to move up the ladder in the EP world, prepare to work, and work hard. You’ll need to be well-versed in so many different skills and might have to be highly educated.

It’ll also take you a lot of time because becoming a security officer doesn’t happen overnight. But if that’s what you want to do, just keep at it, and you’re guaranteed to succeed.

Security Guard vs. Security Officer — Who You Need to Hire

Now that we’ve established the difference between a guard and an officer, it’s time to see who’s the best person for which job. What we can tell you right away is that a lot of it is going to depend on the size of a business and its needs. But it all gets a bit trickier after that.

You see, if you have to secure a big company/store/property, you’ll need a bigger team. You’ll need a few guards to stand somewhere or patrol the area, and you need someone who’ll manage them.  If it’s a smaller place, you can probably get away with having just one guard there.

However, the number of guards you end up hiring will vary on a company’s or event’s needs. For example, how much foot traffic is there on a daily basis? How many people need to cover the area? Is there a need for patrolling or can someone just stand guard?

If you’re the one who’s looking to hire a team or putting one together, keep all these things in mind. Make a checklist that’ll help you decide who to hire, and take it from there.

Now that you know the difference between a security guard vs. security officer, it’s time to conquer the executive protection world. To learn more about what it takes to become an industry pro, sign up for our newsletter to get more information.