History paints a picture of the close protection industry in a very stereotypical light. The “muscle-bound break, glass in case of emergency” visage often fails to underscore the far more nuanced individuals that formed our industry. Case in point – Kate Warne whose efforts in the early private security sector played a vital role in Presidential security and informed (what we now call) protective intelligence before it even officially existed.

Described as a “commanding person” (OGLESBY, 21) by owner Alan Pinkerton, very little is known about Warne before her foray into the burgeoning detective agency. Born in a (at the time) small town in New York, she was widowed by the age of 23 and sought employment as part of a “growing wave of middle-class white women working outside the home” (Garvey, 2016) 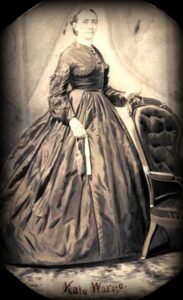 But, in 1856, where others sought work in domestic or clerical roles, Warne sought a different pathway when she strode into Pinkerton’s offices looking for work as a detective. Initially discounting her, stating no clerical staff was needed at the time, Warne made a case for a female detective by saying, “Women could be most useful in worming out secrets in many places which would be impossible for a male detective.” (Enss, 2017)

She continued, stating that women could gain access to places the men could not, befriending the significant others of suspects or by using a man’s unconscious bias against them in the course of an investigation. (OGLESBY, 21) Pinkerton hired her on the spot, later noting that she had an element of determination that set her apart. (Vago, 21)

Over her 12-year career, Warne proved herself time and time again in clandestine roles.  Soon after being hired, she solved a significant embezzlement case for the company by befriending the suspect’s wife and gathering information to locate the hidden assets.

Warne utilized approximately 12 alias, posing once as a fortune teller to extract information from a subject in a plot to poison a ship’s Captain. (Rossen, 2019)

Described by Pinkerton as “clear cut, [with] expressive features” (Bass, 2018) during her tenure, Warne was also responsible for forming and leading the first all-female detective team for the agency. Known as “The Pinks,” the unit focused primarily on counter-intelligence work for the Union during the Civil War. (OGLESBY, 21) She would also go on to lead the “Union Intelligence Service,” spearheading what we now know as protective intelligence for the forerunner to the United States Secret Service.

Perhaps her most famous detail was to safeguard the life of Abraham Lincoln. As part of an agency assignment, Warne was tasked to work an undercover operation for the Wilmington and Baltimore Railroad in February of 1856. She was assigned as part of a team to infiltrate “secessionists threatening the railroad.”

Posing undercover as a pro-secessionist alias she coined “Mrs. Cherry” during her work to uncover actions against the railroad it was quickly realized that a more significant and nefarious act was being planned; A plot to assassinate President Lincoln before his inauguration. (Vago, 21) Unbeknownst to the railroad’s owner, Samuel Felton, Lincoln had also been receiving threats in the form of letters and packages containing such things as knives and “a spider filled dumpling.” (Rossen, 2019)

Analyzing the information, Pinkerton’s [protective intelligence] team worked to discern where the most “time predictable” place would be on the incumbent’s journey. (Rossen, 2019) Known as the “Baltimore Plot,” Warne and three other agents accompanied Lincoln on his trip, covering him in a shawl, disguising him as an invalid, and paying the conductor to ensure the rear of the railroad car was relatively clear of people. (OGLESBY, 21)

During this detail, the agency’s famous “We Never Sleep” slogan was born because Warne refused to close her eyes during the entire trip. (Enss, 2017) Of Warne, President Lincoln stated, “I am sensible, ma’am, of having put you in some inconvenience—not to speak of placing you in danger.” (Rossen, 2019)

She continued to work for the agency for 12 years. Passing away in her mid-to-late 30s, when she succumbed to pneumonia. Her work is a testament to tenacity, perseverance, focus, and dedication—elements that remain a cornerstone to the protector’s ethos.