All the Protection Dogs and Breeds You Should Know

Protection dogs are an invaluable asset in home defense, and they’re incredible at keeping their people safe. However, having a dog, and a protection one at that, is tough, especially if you’ve never owned one, or don’t know which breed to choose.

So if you’re stuck, sitting on a fence, not knowing whether protection dogs are even right for you, you’ve come to the right place. Today, we’re going to dive deep into all the benefits and downfalls of having a protection dog.

Also, we’re going to talk about the breeds that do their job better than the rest, and that could make an amazing addition to your home. So let’s get into it.

Knowing When to Get a Protection Dog

Before you jump the gun and call a breeder, you should first consider whether or not protection dogs are even right for you. If you’re looking for a puppy-eyed pooch to cuddle up to at night, maybe just go down to the shelter, and pick one that you like.

However, if you want a dog that’ll obey your commands, know the difference between safe and unsafe environments, you need a guard dog. Regardless of their breed, these dogs are specially trained to get physical if there’s a threat.

Understanding the Difference Between a Guard and a Watchdog

One pretty common mixup we see often is people not knowing the difference between a guard dog and a watchdog. And no, there’s no difference when it comes to breeds. Any dog can be a guard dog or a watch dog, provided they get the right training.

There are five types of dogs we need to examine:

Watch dogs will be on the lookout for strangers, and probably bark at them or if they see anything strange happening. They require almost no training, because that’s pretty typical dog behavior, and don’t even need to be large (look at Chihuahuas).

Guard dogs will be ready to attack and defend their homes in case of a threat. Yes, they’ll bark, but they can also deliver a powerful bite, which requires training.

Sentry dogs are similar to guard dogs, but trainers also teach them how to patrol areas, and they’re extremely self-reliant.

Protection dogs are the ones that will look after a moving target, which is a principal or their entire family. They require a lot of training because they need to be taught the difference between friends and foes. What’s more, they tend to form strong emotional attachments to their owners.

Lastly, there are attack dogs, which you’ll only see in law enforcement or the military. They receive training to become offensive weapons and can become extremely dangerous if they’re trained or led by someone unknowledgeable.

A Breakdown of the Best Protection Dogs

Now it’s time for the main event, where we talk about which protection dogs stand head and paws above the rest. So let’s get into it.

It’s probably not surprising that we’ve put German shepherds so high up on the list, as they’re an incredibly versatile breed. They’ve been used in police and military organizations for years, and their physical appearance is really imposing.

German shepherds are also loyal, intelligent, and brave. But be advised, they do require a lot of TLC and can shed like crazy.

Dobermans, similar to German shepherds, have a long history as protection dogs, and their appearance is extremely imposing. They are beyond loyal and intelligent, which is why they have such strong protection instincts. What’s more, Dobermans are pretty light on their feet and require a lot of space to exercise.

Rottweilers are the prime example of breeds that shouldn’t be paired with inexperienced trainers or owners. They’re very akin to their owner’s needs and emotions, which is why they require a calm, but confident alpha. Rottweilers are super intelligent, but emotionally dependent, which is why it’s best not to leave them alone for a long time.

Belgian malinoises are high-power, high-intensity protection dogs that are every trainer’s dream. You’ll often see these pups employed in the military and law enforcement because they’re so well-suited for full-time work. However, you shouldn’t get a Belgian malinois if you plan on being away often or if you’re a couch potato. 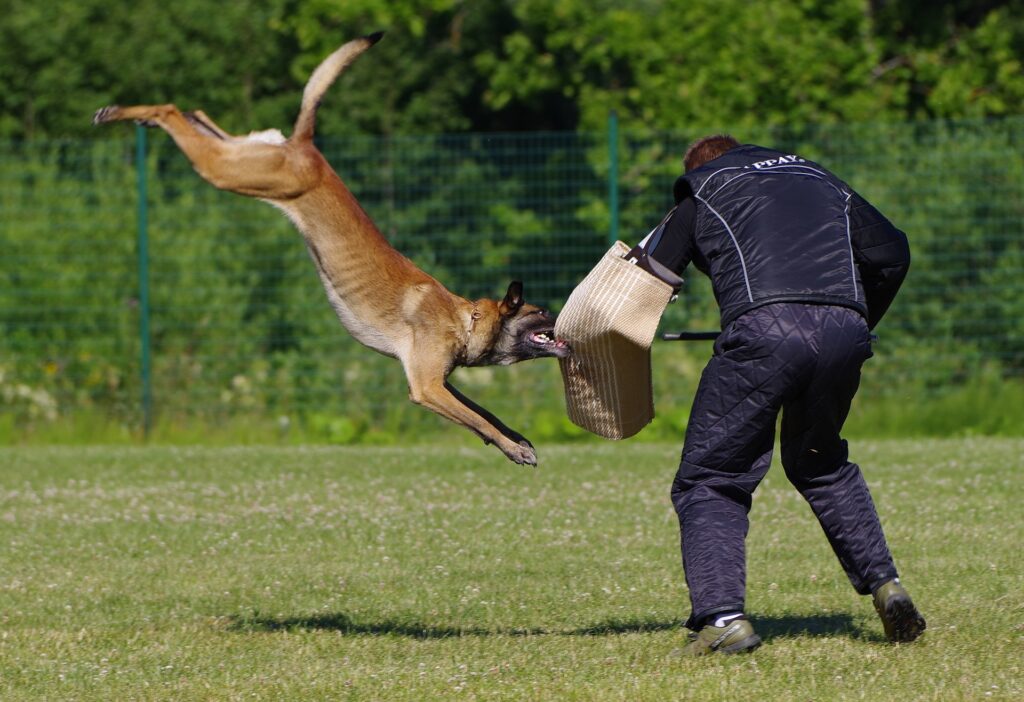 As loveable and sweets as Cane Corsos are, they’re still incredibly fierce protectors. Their appearance is pretty intimidating, and they can weigh up to 100 lbs. Like Rottweilers, it’s not a good idea to get a Cane Corso if you’re an inexperienced trainer or don’t want to put in the time to work with them.

Giant Schnauzers are really emotionally intelligent, which is exactly why they make such great protection dogs. They are big enough to instill fear into someone, but smart enough to know the difference between their families and foes. Giant Schnauzer, although intelligent, can be a bit stubborn, and do require you to work with them constantly.

One of the main reasons Akitas make such good protection dogs is that they’re more loyal than most other breeds. They were originally bred to accompany royal and noble families in Japan, and you can see that in their demeanor to this day. One thing that sets Akitas apart from the rest is that they don’t require a lot of training, but do need to socialize.

Like Akitas, Bull Mastiffs have a long and proud history of working as protection dogs, and they were first bred to deter poachers. These oversized pups are loving, affectionate, and will work incredibly hard at protecting what they care for. Also, they’re quite big and messy, which is why they’re not the best choice for first-time owners.

If you’re in the market for protection dogs, any of these breeds will prove to be more than effective. With that said, no matter which dog you end up choosing, understand that training takes a long time, and it’s a never-ending process. While they’re sure to quickly pick up on commands, it’ll all be for nothing unless you actually put in the time to work with them.

If you’re getting a dog as part of your home defense, you should also consider other factors. While dogs can be invaluable, nothing beats having strong perimeter security, panic rooms, and security systems.

For more news and updates on the EP industry, sign up for our newsletter.

Sign me up!
Share
Facebook
Linkedin
Previous articleEP Services in Africa – The Ins and Outs with Daniel Weil
Next articleAllied Universal Acquired G4S for USD 5.28 Billion