What Are the Biggest Police Defensive Tactics?

In their line of work, law enforcement officers have to use countless different police defensive tactics. That way, they can keep both themselves and the people they’re trying to protect safe. However, a lot of these tactics are only taught at training facilities, and even then, it’s always a toss-up of what you’re going to learn.

Today, our goal is to break down the most common and effective police defensive tactics. These should hopefully give you an insight into the industry, and show you what you need to be focusing on. So let’s get into it.

The Basics of Police Defensive Tactics

The first thing you should know about police defensive tactics is that they’re not the same thing as self-defense. Even though there are quite a few elements of combat and martial arts involved, there are a ton more things that make up defensive tactics.

The first and biggest difference is that defensive tactics are used to repel danger and harm while serving and protecting. On the other hand, self-defense only encompasses the means to protect oneself. What’s more, self-defense is not used during an arrest, and in it, there’s no regard for the safety of the attacker.

Defensive tactics also differ from martial arts because the latter isn’t really something you’d use on the street. With that said, there are a lot of benefits to picking up martial arts or some form of hand-to-hand combat.

Their primary goal of defensive tactics is to assist an officer while performing restraining and arrest. Also, these tactics are supposed to increase the margin of safety for the officers and suspects. If you want to successfully learn defensive tactics, you need to know how to respond with and without tools.

But the trick to applying defensive tactics in a stressful situation is hard work and training. Otherwise, when you’re in the middle of an intense scenario, you might fumble and panic. So these should help you learn how to always be in control, no matter what.

One thing that everyone should know, no matter the industry, is how to properly assess any situation. In law enforcement, executive, and close protection, one of your most important tasks is to properly analyze what’s going on around you. Only when you have all the information in mind can you react.

First off, you need to clear your mind and avoid any sort of panic because that’s how you make mistakes. You need to mentally step back so that you can look at the situation objectively.

In almost all defensive tactics, your primary goal should be to use the least amount of force possible and de-escalate the situation verbally. Also, more often than not, you’re only going to need to use minimum force during arrests.

With that said, there are three levels of force that we see in police defensive tactics:

With minimum force, you’re only using verbal techniques to accomplish your tasks. The object of this type of force is not to physically injure anyone.

Intermediate force involves you using both armed and unarmed techniques, like batons, stun guns, and pepper sprays. Basically, anything that’s considered a non-lethal weapon. The goal of intermediate force is not to injure anyone in a permanent or life-threatening way.

Lastly, there’s maximum force, which involves using lethal weapons like firearms and knives, with the goal being to inflict extreme pain or cause death. 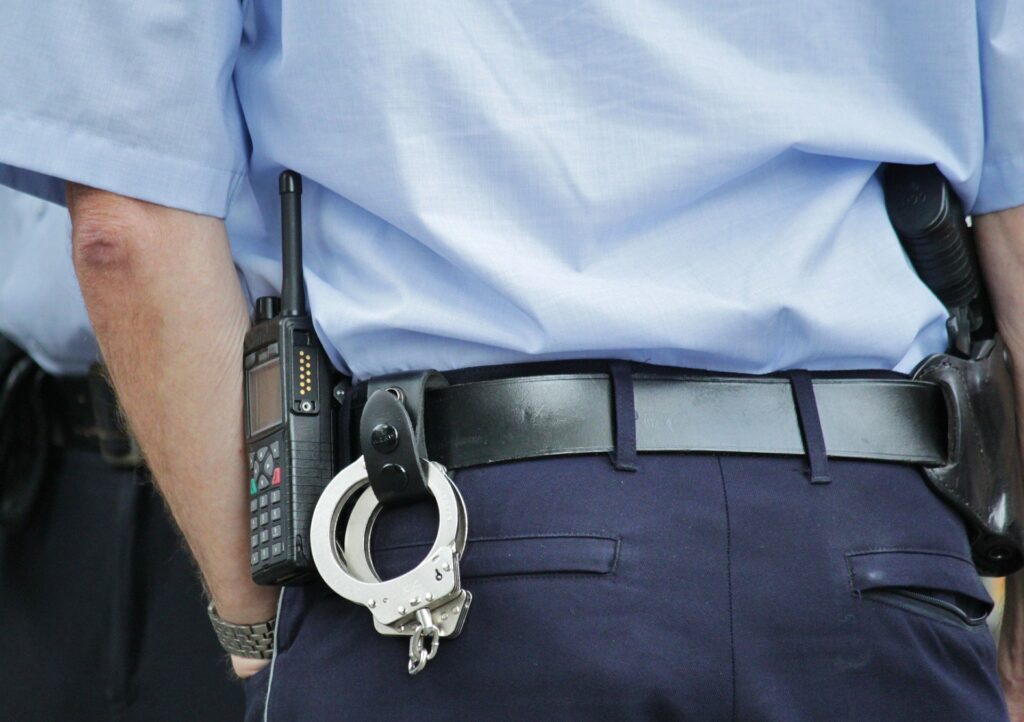 Now that you know about the potential levels of force, it’s time to talk about the tactics that could help you avoid using it in the first place.

Once you have a tactic or technique that you want to use in mind, it’s time to distract the opponent so that they don’t get in the way. The most common, and least dangerous type of distraction is verbal. You could say Hey, look over there! or Watch out for that car/dog. Whatever you say, make sure that it’s urgent enough to distract the perp, while you disarm or arrest them.

Of course, verbal distractions can only do so much, which is why you can also use tactile ones. For example, you can pinch someone before escaping a lock or even do a kick to the groin area before you attempt a wristlock. What’s more, another common technique before breaking down a door is throwing a flashlight through a window.

No matter which technique you choose, just remember its purpose — surprising the attacker. While distraction can work for you, it can also be used against you.

Verbal techniques represent the highest level of control, and they take the longest time to master. They will give you victory without having to fight, which is an incredible accomplishment on its own. However, to really nail verbal techniques, you need to learn street psychology. You should also always be thinking about what’s appropriate in the specific environment or context you’re in.

Body language is a type of non-verbal communication, which has four specific parts:

Observing these four elements, and learning how to respond to them is a really crucial part of defensive tactics. But it’s important to note that body language can be culturally specific. So just because a certain stance or facial expression means aggression in one place, it could be something totally different in another part of the country/world.

There are a ton of different training facilities that promise to teach you police defensive tactics. And if you want to get into law enforcement, or just improve your skills, we definitely recommend taking a class or two.

However, before you sign up and hand over your money, make sure that it’s a legitimate place with tutors from the industry. If you’re unsure where to go, ask someone you know, like a superior, or check out some articles on the Police Mag.

As we’re sure you’ve pieced together by now — police defensive tactics come in the hundreds. Whether it’s de-escalation, reading body language, disarming, or tackling someone, there’s a new skill to be learned every day. But don’t let that overwhelm you.

If you’re eager to pick up new skills and learn new techniques, just be persistent. And if you want to speed the process along, sign up for our newsletter. We’ll give you all the latest tips and tricks, and keep you ahead of the game.

Sign me up!
Share
Facebook
Linkedin
Previous articleHow do I get started in the EP industry?
Next articleWhat causes (secure) behaviors and how can they be influenced?