Recently, we wrote an article on all the incredible, fiercely loyal protection dogs that will protect you, your family, and the principal at the drop of a hat. However, given just how many protection dog breeds there are, we knew that we needed to expand that list.

So today, we’re going to talk about protection dogs that might not have made the cut the first time around, but will still make an awesome addition to any home or business. Without further ado, let’s get into it.

Appenzeller Sennenhunds are extremely agile and energetic, probably due to their smaller size. They originally come from Switzerland and are very friendly, which is why they make such good family dogs.

However, Appenzellers are naturally wary of strangers, and no amount of rewards can distract them from protecting their humans. One thing to know is that they’re better suited for colder climates, and require a lot of space to burn off all their energy.

Australian Shepherds, besides their natural beauty, possess a lot of qualities that make them one of the best protection dog breeds out there. They are natural herders, which is why you’ll often see them on ranches and big properties.

Aussie Shepherds are a great choice, especially when it comes to kids because they know when to be gentle, and when to be brave. But again, like Appanzellers and even German Shepherds, these dogs require a lot of space to run around in.

Three words to describe a Caucasian Shepherd Dog would have to be: Kind, Loyal, and Fearless. This breed is an incredible guardian, and the dogs can weigh anywhere between 100 lbs to 170 lbs.

One thing that makes Caucasian Shepherds such good guardians is that they were bred for centuries to protect properties from trespassers. Also, they’re very adept at warding off predators, and they’re incredible watchdogs.

If you’re looking for a sporting dog that doubles as a protection one, you can’t get any better than a Chesapeake Bay Retriever. As a dog who lives to hunt and be active, a Chessie wouldn’t be a good choice if you’re a couch potato, as is the case with most protection dog breeds.

Chessies are extremely devoted to their families and make great companions for kids. But they do shed a lot, and their fur retains a lot of moisture, which can sometimes cause a bad odor. So just consider that you’ll need to groom them more than a Boxer, for example.

If you’re looking for a loyal, affectionate, and brave dog, it honestly doesn’t get much better than the Rhodesian Ridgeback. According to the American Kennel Club (AKC), these dogs were originally bred in Africa to track, but not kill lions, and they’re famous for the stripe or ridge of backward growing hair on their backs.

Even though Ridgebacks are so protective and affectionate, they can also be very stubborn and domineering at times. That’s why they require guidance even while they’re puppies and a strong and confident hand. 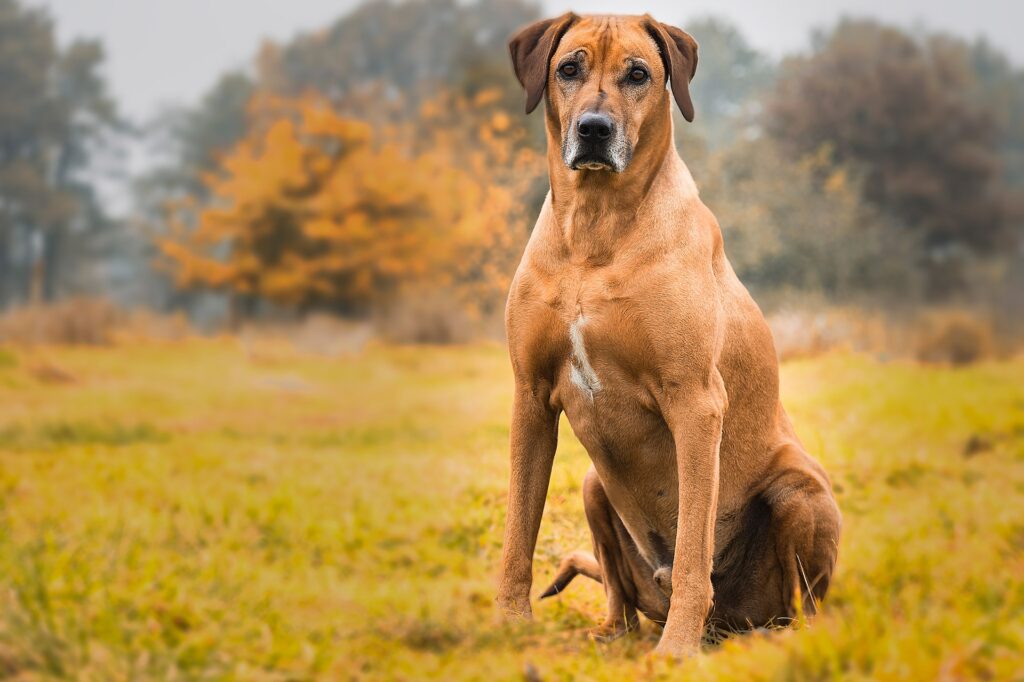 If you don’t have space in your home for a large breed like the Caucasian Shepherd Dog, you should seriously consider Staffordshire Bull Terriers. These tenacious pooches usually weigh less than 40 lbs, which means that they’re a great fit for smaller spaces.

Staffies are incredibly muscular and brave, but they’re also very obedient and relatively easy to train. They’re beyond loyal, which is just one of the qualities that makes them such amazing protection dogs.

A Puli is one of those protection dog breeds that you just absolutely can’t mistake for any other. The mop-like dogs are incredible at herding, which means that they pick up on commands and training really fast. They’re even lighter than Staffies and have a life expectancy of anywhere between 10 to 15 years.

Even though they have a somewhat silly exterior, their interior is all power and brains. They’re light and quick on their feet and are basically considered the acrobats of the dog world. However, as you can imagine, their unique coats do require a lot of attention and care.

Even though Boxers have a menacing face and stance, they’re actually not an aggressive breed. They’re extremely energetic, require a lot of exercise, and are excellent watchdogs. Boxers are really protective of their owners, and they’re intelligent so they pick up commands pretty quickly.

One great thing about Boxers is that they get along with kids swimmingly, which is why they’re a good choice for families. Also, they’re pretty affectionate and patient, but they are more prone to some health issues, like heart disease.

As one of the largest protection dog breeds around, the sheer size and looks of Neapolitan Mastiffs are usually enough to scare off any intruder. The males can weigh up to 150 lbs and have a life expectancy of around nine years.

Neapolitan Mastiffs are fiercely loyal to their owners and will attack as soon as they sense a threat. But one thing to know about these Mastiffs is that they’re pretty expensive. In fact, a Neapolitan Mastiff puppy can go for up to $5,000.

With a name that sounds like it’s straight from the Simpsons-verse and a scruffy appearance, Bouvier des Flandres might not seem like the best protection breed at first glance. But these dogs are incredibly loyal, obedient, and love to stay busy.

Beneath all the scruff and fluff, Bouviers have powerful muscles and strong bones, and they make excellent watchdogs. However, they are pretty active and need an owner who can keep up with their tempo. Otherwise, if they’ve got nothing better to do, they might get destructive, and start gunning for your slippers.

Good protection dog breeds are not that difficult to come by, as long as you’re looking in the right place. Now, one thing to remember is that, just because these are protection breeds, it doesn’t mean that they don’t require training. Also, most of them have a lot of energy to burn, and they need a high-quality diet.

For more information and updates on dogs, regulations, surveillance, and everything EP — sign up for our newsletter.

We are proud to announce the finalists for EP Wired’s Top EP Schools 2022 competition!  From November 24 through December...
Corporate EP programs

A Word From the Organizers: IPSB

The Stalker – Much More Than a Physical Threat