A heavy police presence remains in the streets as counter-terror officers investigate the Liverpool Women’s hospital explosion. On Remembrance Sunday, an explosion involving a taxi killed one person and injured another.

As the media report, police believe the passenger manufactured and brought the device into the taxi. He died immediately from the impact of the blast. Police released the name of the deceased terror suspect as Emad Al Swealmeen.

Thankfully, the driver of the taxi escaped moments before the car caught fire. According to news outlets, Prime Minister Johnson praises the driver’s quick thinking and bravery.

Four men previously arrested in connection with bomb blast, under UK terrorism laws, have been released without charge. Regardless, the Home Office minister states that it’s not an impossibility for other people to be involved. The investigation is continuing at pace.

Protective security must remain a vital consideration for all businesses regardless of their industry. The threat from extremist activity will never go away. The targets will become those with vulnerabilities in their physical security defences instead of the obvious military and government buildings.

The media interest in a case where thankfully only the bomber was killed goes to show that even unrelated targets would generate a huge amount of media interest, therefore furthering the cause and attention given to various extremist groups and ideologies.

It is also important to point out that human security awareness and the confidence to act upon suspicion is one of the most valuable tools in our arsenal against such threats.

The taxi driver, David Perry, became suspicious and his quick thinking possibly saved many lives. All businesses and individuals should invest in situational awareness training such as that provided by government institutions and reputable providers.

Unclear Motivation for the Attack

The press reveal that the police released the detained individuals from police custody because they were satisfied with the accounts they provided. At the same time, Assistant Chief Constable Russ Jackson believes it may take weeks to understand the planning and preparation behind the Liverpool Women’s hospital explosion.

Thus far, we understand from news reports that the taxi pulled up at the maternity wing of the hospital shortly before the explosion occurred. In light of the incident, the hospital is restricting access to the buildings, with patients diverted to other hospitals if feasible.

Nevertheless, it’s unclear as to the passenger’s exact motivations. What connection is there with the Women’s hospital? In addition, reports infer the suspect as an asylum seeker who relocated to the UK from the Middle East several years ago. As stated by his former landlords, the deceased suspect converted to Christianity at a ceremony in Liverpool’s Anglican Cathedral. 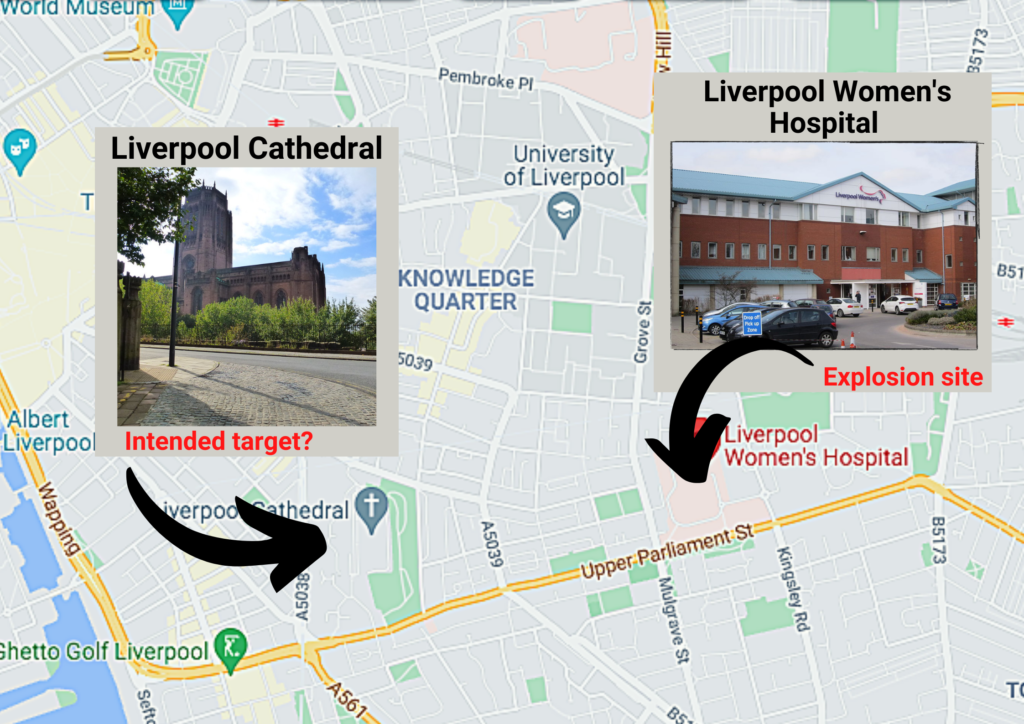 The Cathedral, a short distance from the hospital was the site of the city’s service of Remembrance. Approximately 1,200 military personnel, veterans, and families of WW1 heroes had gathered. Police will confirm whether the true target was the hospital or the Cathedral.

Furthermore, in the police-issued statement, it’s mentioned that the North West Counter Terrorism detectives are keeping an open mind as to the cause of the explosion while they work with the Merseyside Police department.

The terror threat level raised to severe means that another attack may be highly likely. Live on BBC Breakfast, Security Minister Damian Hinds told the public they “shouldn’t be changing daily lives” due to the recently raised threat level.

Mr. Hinds went on to mention how citizens need to stay alert rather than alarmed during these unsure times. He made no further comments regarding police action as this is an ongoing live investigation. Police have the right to the space, time, and ability to carry on their searches without interruptions.

However, it begs the question with this being the second incident within a month: Does the explosion warrant cause for greater vigilance and stricter counter-terrorism laws?

Not to mention, police treated last month’s stabbing of conservative MP Sir David Amess as a terrorist incident. As per police reports, the killing of Sir David at his constituency clinic has potential links to Islamist extremism.

In light of these recent events, we must ask: Is there too much emphasis on public vigilance and insufficient focus on the root of the problem? Yes, staying alert is important, but are we just biding time until the next strike?