Whatsapp, a Facebook-owned messaging app, up until now reputed as one of the most secure communication tools, gave its users an ultimatum. Either agree to share your personal data with Facebook or stop using the app. In turn, this re-sparked the topic which are the most secure messaging apps.

These apps make it easy to communicate and connect with people and colleagues. And for some professions, such as executive protection, using a safe and protected channels of communication is a priority.

Technological advances opened up new avenues in this regard. However, with those advances, new avenues arose immediately through which your privacy and security can be breached. Sadly, some private messages and apps can potentially be exploited by third parties, companies behind those apps, as well as governments collecting private information on their citizens.

This is why it’s so important to stay abreast with the most secure messaging apps and security trends in today’s tech-fueled world.

What is Secure Messaging?

As we said, we all rely on messaging services to carry out our regular, daily communications, both for personal and business use. They are an integral part of our lives and often we exchange sensitive info, location and other data.

So what happens then when we are in country with an autocratic regime that closely controls and monitors the internet?

This is why it’s important to familiarize yourself with the security features of an app before deciding which service to use. Generally, secure messaging combines several elements, but the three most important are: end-to-end encryption, multi-mode messaging and synchronization with other platforms or devices.

Many claim to know secure messaging is a vital resource for EP however the number of EP practitioners who continue to send unsecured text messages is disheartening. The risks of using traditional and inadequately secured communications methods can be greatly reduced by using emerging messaging technologies. This allows EP practitioners to use a more secure communications platform with minimal adjustments to our standard protocols.
– Caleb Gilbert, Head of Security for the CEO of PayPal

In a nutshell, end-to-end encryption refers to applying encryption to messages for device A in such a way that only device B – to which the message was sent, can encrypt it. Basically, the message travels encrypted all the way from the sender to the recipient.

This technique is used by secure messaging apps to exclude parties such as your Internet service provider, app makers, governments or anybody else from being privy into your communication. From the moment the message is written, while it’s in transit and until it’s received, no one else can see it.

Currently, this represents the most private messaging method – and if messages are not end-to-end encrypted, they are non-private. Messages are decrypted by using locally stored keys or secret codes, once they pass from sender to receiver.

Also, encryption does not allow anywhere the storing of the copies of messages.

This feature allows users to include different forms of communication into their messages – like video or audio files. Messaging aps where you can utilize multiple modes, often allow their users to delete whatever type of message comes through.

This element allows users to use the same messaging app on different platforms at the same time. You can sync your messages across web, mobile or desktop platforms.

So, if you as a user would feel more secure with the possibility of, say, storing private messages in one location and then deleting them from another – this element will up your feeling of safety and privacy.

The Most Secure Messaging Apps

Online privacy is a subject on which we are much more aware of now than in recent years. Identity theft or online snooping a dangers that we have on our minds on a daily level.

Luckily, as governments and agencies grapple with privacy and public security issues for years, app makers were no idle and they created a number of effective encryption tools. 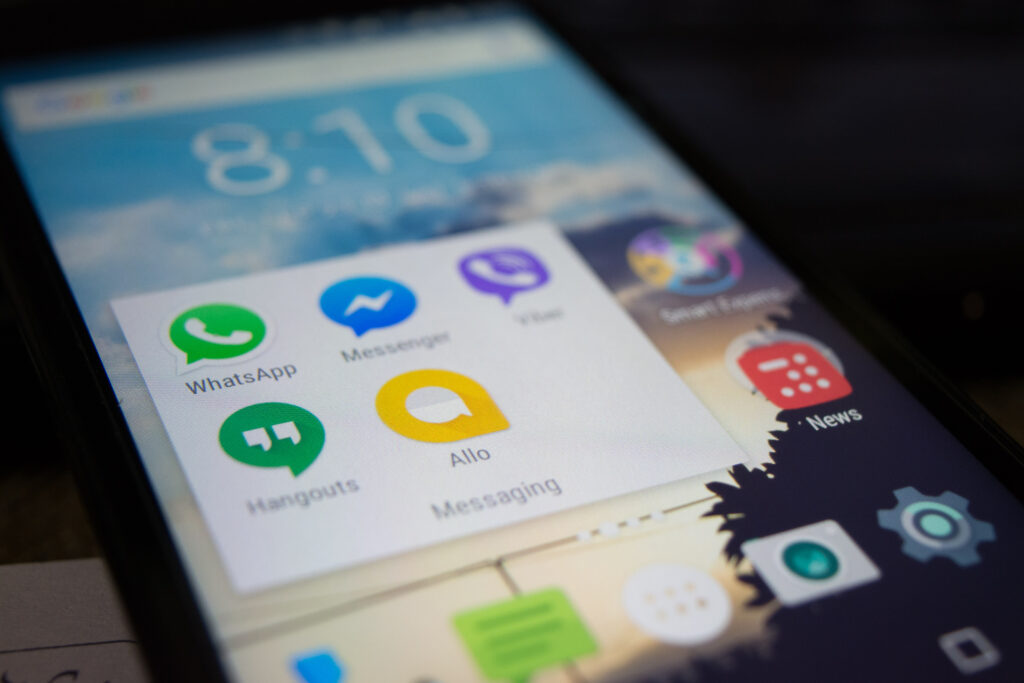 With users making up nearly 20 percent of the global population, WhatsApp is one of the most well-known messaging apps out there. It not only utilizes end-to-end encryption, it uses the crazy-strong encryption protocol developed by Signal.

One of the biggest arguments in favor of using it is that your contacts probably already have it installed on their devices. However, what might give you pause is the fact that it’s owned by Facebook.

This means that you are actually contributing in data collection practices by the social media giant. While Facebook cannot read your messages, they can still log certain data about you for their marketing endeavors. Data like the location of your phone.

Telegram is a hugely popular platform if you are looking to have heavily-encrypted convos. End-to-end encryption is used also for group chats or voice call – though, only if everyone involved has Telegram. Apart from this, you can self-destruct messages, files, videos long after they have been sent or received.

And if you are looking for that extra bit of security, you can force the other side to delete the conversation and messages by turning on the secret chat option. However, some of these features depend on the type of device you use – and can be utilized only from a specific device.

But, if your device is secure, don’t worry about your secret chats.

This is another secure messaging app that tries hard to keep your data safe from corporations, governments and cybercriminals. Threema can be used anonymously – which a huge plus, and apart from secure messages, its calls can also be encrypted.

The app ensures that no contact details are saved on their servers and all messaging data is deleted after being sent. This makes your files more secure since they remain on your device – and not some third-party server where they can be intercepted.

Also, you do not need to use an email to sign in – or any other identifiable information. All in all, a good combo of security and anonymity.

Number of Users: Less than 1 million

Wire ticks some very important boxes in terms of security. It offers end-to-end encryption, complies with the GDPR, its open-source and not obligated to share its data with surveillance services.

Wire uses end-to-end encryption with SRTO and DTLS for calls, while using Proteus for text messages and images. It is completely open source, so users can inspect, verify or even improve on the source code through GitHub.

However, it also collects and stores some user data.

The company admitted to keeping records of whom their users contacted – and saving those records in plain text. They also store emails, phone numbers and usernames. But, Wire does not sell analytics or usage data to third parties.

Number of Users: Exact number unclear, but the app has between 1 and 5 million downloads

Most regard Signal as the gold standard of secure messaging apps. Apart from cutting edge encryption, the app is pretty simple with a straightforward interface.

A particularly interesting feature is the option to replace your default SMS app – since basic text messages are not encrypted. On top of the very tight security, Signal offers video calling, and disappearing messages that vanish after a certain time.

Signal is the only apps that has its privacy tech always enabled. By default, the system ensures that there is never a risk of sharing moments or sending messages to a non-intended recipient.

When WhatsApp came out with the changes to its terms of service, this caused a major backlash from users all over the world. A lot of people interpreted this move as an unwelcome shift in the company’s data-sharing practices.

They believe that WhatsApp – and Facebook in turn, will now be able to read their messages and access their personal data. This is not quite true.

Further loss of user trust was caused by Elon Musk, who immediately suggested that people move to Signal instead.

Even though, WhatsApp officially rushed to assure its users that the upcoming changes are minor and that the company will not be able to read messages, confidence in the app is very low.

But the funny thing about trust is that, while a single sentence can definitely destroy it, rebuilding it takes more than a nice statement or well-worded press release.

And if you and your team are on a quest to find more secure messaging apps, we hope this article was useful and beneficial in your search.