Former president Jacob Zuma was arrested last Friday, with 75 people killed in the ensuing South Africa riots. Those well-acquainted with the country’s history claim that this was its worst unrest since the end of apartheid.

Riots derailed the country due to the ex-president ending up in jail for failure to cooperate with a corruption probe. Although he surrendered himself peacefully, his supporters stationed themselves by the hundreds outside his rural homestead in Nkandla on Sunday.

Some of them told the media that the police would have to kill them if they wanted to get to the former president. However, on Wednesday night, almost no resistance was noticeable. In fact, only the lights of reporters’ cameras brightened the dimmed street in front of the compound.

South Africa riots are only getting worse with record-high unemployment and harsh measures such as lockdowns, curfews, and bans on the sale of cigarettes and alcohol.

An exacerbating factor has been social media, with Zuma’s reporters and relatives encouraging riots even there. The police minister of South Africa, Bheki Cele, said they identified a dozen people as having instigated the riots, including online.

Additionally, the role of private security has been colossal in attempting to protect further looting. Moreover, multiple foreigners were victims of stabbing in what officials called xenophobic attacks.

Due to the scale and intensity of the riots, the South Africa Police forces, even with the support of the military, have become overstretched and are therefore no longer able to respond to individual emergencies adequately in several locations.

This also means that mundane tasks such as buying essential goods have become near impossible for citizens in the affected areas. The lack of access to essential goods is a very worrying development.

At least 75 people have died during looting and the ensuing stampedes in the provinces of Gauteng and KwaZulu-Natal, the strongholds of the former head of state.

Thousands participated in illegal actions by stealing electric appliances, liquor, food, and clothing from stores. This is according to police Major General Mathapelo Peters’s statement on Tuesday night. In his words, 27 deaths were under investigation in KwaZulu-Natal and an additional 45 in Gauteng.

If that wasn’t bad enough, some of the looters tried breaking into ATMs. By doing so, they instigated explosions and died in the process. But, most dramatically, some engaged in shootings, including shopkeepers, thereby killing more looters.

Exacerbating the situation were rumors of police officers looting goods, although this is not verified news yet. 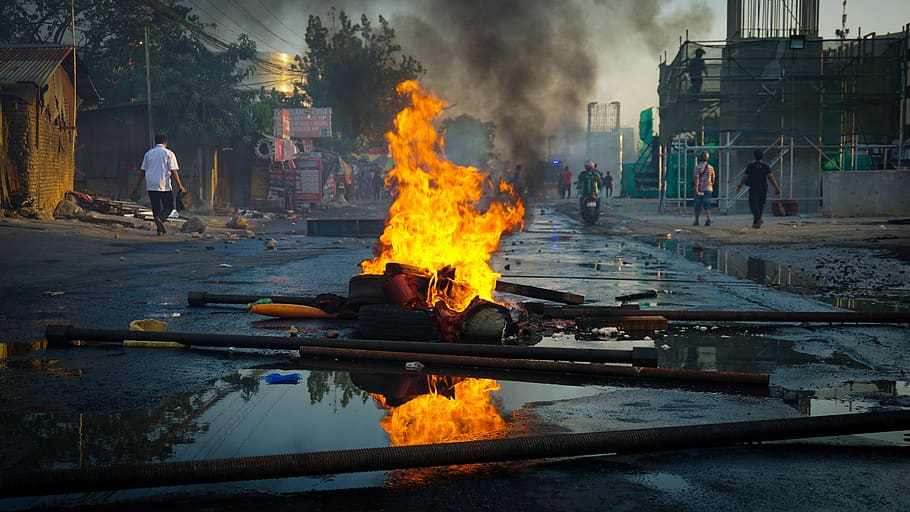 With the death toll rising, the government called in the army to help squash the unrest. This took place after fearful citizens began establishing so-called defense squads to protect businesses and homes.

Even upon the deployment of soldiers, the situation didn’t improve considerably. However, authorities said that they arrested some 1,234 individuals.

Following the arrests, rioters threw stones at the police and shouted for the release of those arrested.

Amid looting and rioting, the number of injured people coming to the emergency wards had tripled. Due to this, the government closed some COVID-19 vaccination centers. This is happening despite the urgent efforts to inoculate thousands of citizens aged 50 and older.

The Whys of Zuma’s Arrest

Former president Zuma ― known for his fight against the white-ruled apartheid government ― has had a tough time with the country’s democratic institutions in the past years.

The current criminal investigation against Zuma revolves around his relationship with three Indian-born businesspeople and billionaires. The officials claim that he allowed them to exert influence on public policy.

Furthermore, the current government asserts that he and his accomplices siphoned tens of billions of dollars during his tenure. However, he denies all allegations.

Tainted by scandal and mismanagement, ex-president Zuma’s rule from 2009 to 2018 resulted in many seeing him as a populist figure. Well, that is except for most of the Zulus in his home province, KwaZulu-Natal, one of the two provinces where the South Africa riots are centered.

Even before South Africa elected him president, the media and experts accused Zuma of corruption. For instance, he faces a separate trial over a £3 billion arms deal he signed in 1999, during which he was deputy president.

After officially leaving the presidential post, what stayed behind him was a stagnant economy, high unemployment, and extreme inequality.

Yet, comparing his situation to the apartheid struggle, the former president told a crowd, “I fought for freedom. I was fighting for these very rights. No one will take my rights away. Even the dead that I fought against during the liberation struggle will turn in their graves.”

Before the arrest and during a hearing of Mr. Zuma, a lawyer working for the anti-corruption commission, Tembeka Ngcukaitobi, stated: “We are dealing with a repetitive, recalcitrant lawbreaker in the form of Mr. Zuma.”

The ex-president is currently serving a 15-month sentence for contempt of court. The aftershocks will resume in the weeks and months ahead.