The Clockwork of Putin’s Security Team

Putin’s security team has to be the best Russia has to offer. Considering that we’re talking about one of the most influential and controversial figures on the planet, it’s vital to have world-class bodyguards and complex and well-organized security in place.

What’s more, a large volume of preparation and management goes into protecting President Putin. Perhaps even more than most other heads of state. In fact, months of preoperative planning occur before the President appears anywhere for a public appearance.

Close and executive protection usually comprises of three factors: position, threats, and risk. For the best-trained team to ensure the safety of the national leader, they must be three steps ahead, analyzing any possible hazards that may happen during an outing.

So, let’s uncover the knowledge and skills needed to operate as Putin’s security team.

Command of the Federal Security Team

In Russia, the Federal Guard Service provides executive protection to heads of state. They serve to keep both the President and prime minister, Mikhail Mishustin, free from harm. Here’s a quick rundown of whom the federal guard is charged to protect:

Furthermore, agencies within the Federal Protective Service are charged specifically with protecting the immediate family of President Putin and the Prime Minister. For any government official not listed above, the president grants a special order for close protection.

The Russian Presidential Security Service, and the secret protective forces under the Federal Guard Service, are directly responsible for the president’s bodyguard services.

As with any world leader, the stakes are high regarding their protection and Putin’s personal protection is at the top of this list.

Like the Secret Service protecting the U.S. President, it’s a delicate balance of allowing a principal enough room to engage with the public while leaving no room for error. Putin’s protective detail takes this mission extremely seriously, where absolute loyalty is a must.

What might be more imposing is what you can’t see that goes into Putin’s protection and where failure is not an option.

The mission of the president’s bodyguard service is to maintain his safety and allow him to carry out his leadership duties as needed. That means the team must be able to anticipate threats before they arise.

After all, safety as the priority trumps the necessity to apprehend attackers. Now, to do this, the protective detail needs to be stealthy yet entirely present. With only their demeanor, no speaking, they announce that the principal is off-limits.

Combat experience, while beneficial, is not a necessity as it usually doesn’t apply in this line of work. However, members of Putin’s security team are required to meet basic specifications, including:

Responsible protective details have high stamina to keep up with the grueling demands of the job. Agents are discharged after the age of 35 as physical capability is no longer at its peak. Experts surmise that physical strength peaks around 25 years, when muscles are the strongest. Although, muscles stay almost as hefty as at their peak for the next ten or so years.

The training program members of Putin’s security team undergo is all about considering available forces, possibilities, and equipment to meet current national security tasks. To say the least, the training is as intense as they come.

Members are put through rigorous drills to build their capacity to acclimatize their bodies to hot and cold temperatures. In other words, agents push their forms to the extremes and achieve optimal physical fitness.

Strategy and Tactics: It’s All in the Planning

Anytime President Putin steps out into the public for official duties, guards rush to organize themselves into four groups. In this way, the team is better prepared for the emergence of potential threats and not just defined or expressed risks.

The first ― or closest circle ― to the principal remains in an alert position at all times. Agents position their hands in front of their body, with the left hand raised midway. In case of danger, this proactive position of the first circle allows them to shield the president with their bodies immediately. Also, alongside their human figure, the agents deploy their suitcases as a protective shield.

Next, the second and third circles border the perimeter of the crowd. All details remain highly inconspicuous while simultaneously searching for suspicious persons discreetly. In this way, they prevent such persons from encroaching near the president.

Finally, members of the fourth circle station themselves on rooftops of surrounding buildings, waiting. They are agents or snipers ready to take out potential attackers in the blink of an eye.

As hard as you try, sometimes you’re underprepared for a situation. Other times, unanticipated events result in security protection staff utilizing tactics such as manhandling and shoving reporters. And this is sometimes the reality of many protective details.

According to the media, chaos broke out at the recent Biden-Putin summit, with reporters from both sides pushing and yelling at each other. Even talking over the two world leaders. 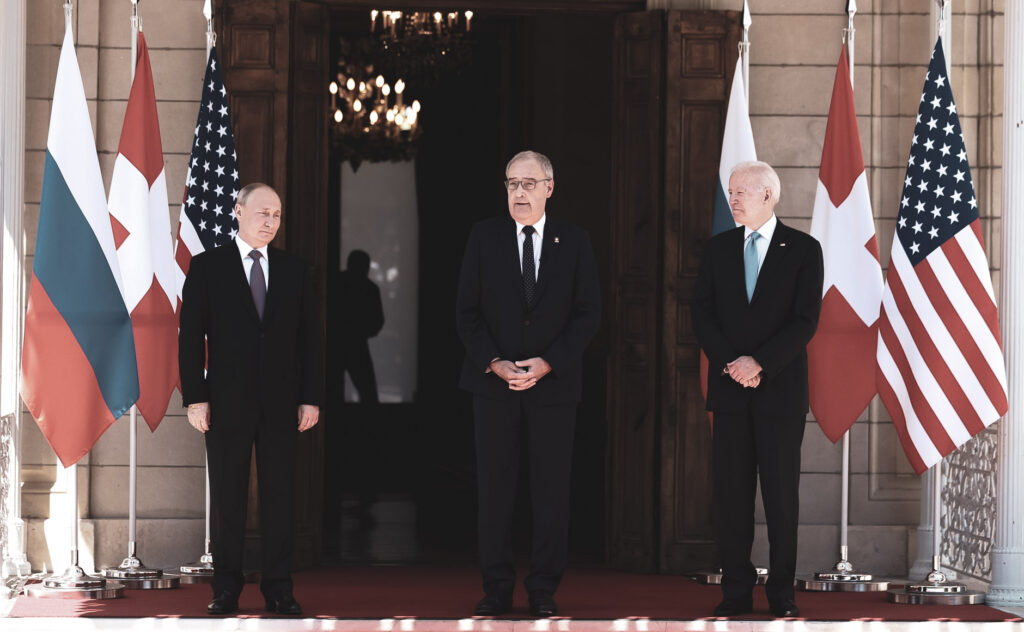 Not to mention, proximity is power, and Putin’s security team reacted in kind to protect their principal at any cost. For instance, the plan of attack seems to be one of remaining impenetrable to keep potential attackers and intruders at a distance. In the end, deciding on whether or not security pushed too hard and reacted unprofessionally is hard to judge.

Over the years, Putin’s inner security circle began to shift as they worked to build a strong brotherhood of the secret intelligence community. The replacement of fellow KBG operators and confidants with more trusting comrades tends to happen.

Loyalty is everything within the Russian administration, as Putin aims to put only trusted men in top security roles. As a former KGB officer, Vladimir Putin’s predecessor Boris Yeltsin and their inner circle handpicked him to lead Russia. Critics say that loyalty and nepotism do go hand in hand.

Regardless, we know of officers like Yevgeny Zinichev, the President’s former bodyguard and a man who risked his life diving into the Arctic River to rescue a filmmaker. Unfortunately, neither of the men survived. What was a training exercise to oversee large-scale emergency drills ended as a tragedy for the two.

Following his time working in Putin’s security team, Zinichev achieved promotion to Russian Emergency Situations Minister. The position he served for the remainder of his life.

As the media report, Putin declared this an immeasurable personal loss of a reliable and loyal friend. Indubitably, these lay claim to the strong brotherhood of the Russian secret security community. Like the President stated, minister Zinichev died doing his duty to the end.

It’s important to note that Russian privacy laws are such they allow for the installation and use of tapping hardware and software of any kind. But only if directly related to the security of the President.

Equally important, the security team may conduct body searches and pertain access to any building, organization, or vehicle. After all, the protective strategies that go into protecting the president of Russia are complex.

The team operates as a well-oiled unit that knows what they’re doing and for whom. It also helps that President Putin himself complies with the security demands.