Night Vision Technology Is Worth the Hype

You’ve probably seen actors talking about night vision technology in pretty much every spy or EP movie in the world. But how much of that is actually accurate? Better yet, how can any of that knowledge help you while you’re on assignment?

Today, we’re going to dispel some common Hollywood myths and special effects tricks, and show you what night vision technology is really about. We’re going to talk about what works, what doesn’t, and which tools you should have in your kit.

So let’s get into it.

First, let’s address the age-old myth concerning night vision tech. Can you really see that much detail in complete dark, while standing hundreds of feet away? Yes, you absolutely can.

However, how much you see through a pair of goggles, for example, is going to depend on the type of technology being used. So in your quest to understand night vision tools, these are the two terms you need to know:

Let’s quickly break down what these mean to help you better understand what you’re getting yourself into.

Before we can explain image enhancement and thermal imaging, you first need to understand a bit about infrared (IR) light. It’s the basis of night vision technology, and it’s where we have to start.

The first thing you have to know is that the IR spectrum sits right next to the visible light spectrum. Also, red has the least amount of energy, and it can be divided into three categories:

Every living object, and a lot of the non-living ones, emit thermal-infrared energy, which is what our equipment picks up.

Most image enhancement systems are actually known as night-vision devices (NVDs), and they’re what most people are referring to when they’re talking about the technology. All of them have what’s called an image-intensifier tube, which is what collects and amplifies both visible and IR light.

To avoid going into too many technical details here’s what light goes through to get to the final stage:

With thermal imaging, night vision tools capture the upper part of the IR light spectrum. Basically, by capturing the various levels of IR radiation, they can detect temperature.

Full disclosure: thermal imaging is definitely behind image enhancement, and we’d much rather recommend NVDs. The thermal tech can be way too expensive, and not provide images or videos that are good enough or justify the price.

Also, and this is probably the worst drawback, it can’t capture target objects if there’s something transparent in front of them. So you’d have to say goodbye to doing surveillance detection through a window. 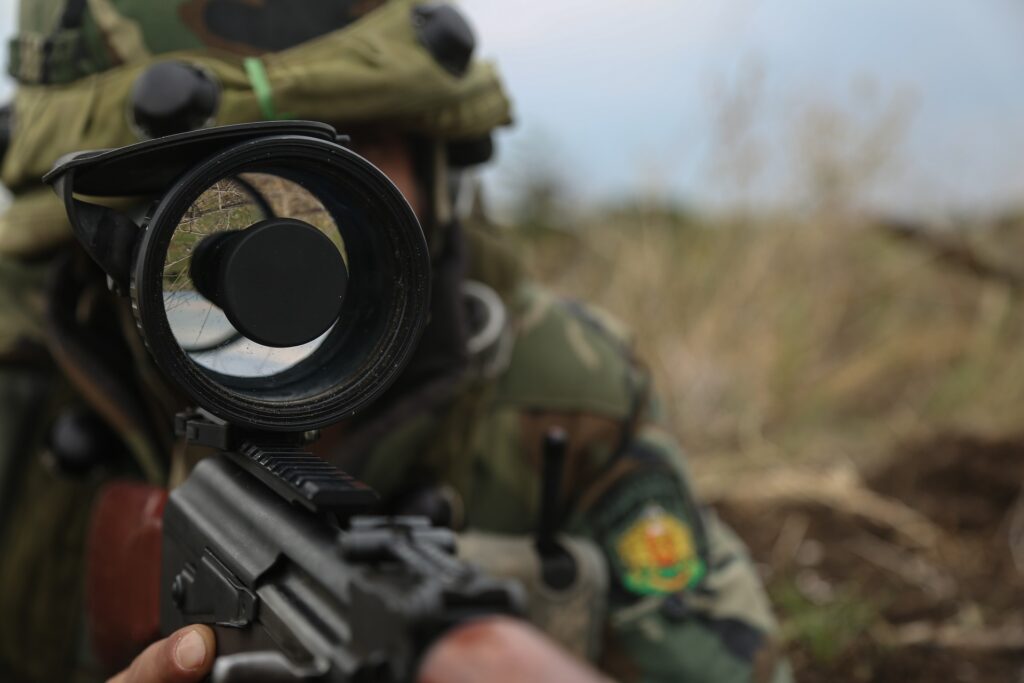 Night vision equipment has a ton of different applications in the world, and you’ll find it in almost every industry. Aside from EP, the military, and security, the most common industries that use it are:

While their end-goals might be different, most of these industries use either goggles, scopes, or cameras. Here’s how all three of them work.

Goggles, as you can probably imagine, are usually worn on the head, but they can also be handheld. They’re binoculars, and depending on the model you have, they can have a stereo or single lens. They’re probably the best choice if you need to constantly be on the move, like if you’re exploring a house or building.

On the other hand, since scopes are monocular, they work much better when they’re handheld or mounted to a weapon. Ideally, you won’t be using scopes when you’re moving, but rather standing still, and looking at an object. They’re also the best choice if you need to go back and forth between night and regular vision.

If you want to constantly monitor a location or an object, you need to install night vision cameras. You can usually watch a live feed directly on your monitor or device, while the footage is stored in a VCR.

Nowadays, most security cameras come with a night vision feature, as well as motion sensors. That means that finding a good model for your business shouldn’t be too difficult.

The Dos and Don’ts of Night Vision Technology

As with any other equipment in the world, if you want your night vision goggles, scopes, and cameras to last, you need to take care of them.

First off, before using any tool, check the manufacturer’s instructions. There might be some details specific to that device that you don’t want to miss. You could have water-resistant scopes, and not even know it only because you didn’t read the directions.

You should also always keep your tools clean, especially lenses. To help with that, we suggest using lens caps and storing devices in their cases. That should help protect them from dust, dirt, and debris, especially during transport. You should also store the tools in dry and cool places, away from heat and moisture.

Now that you know about the dos of night vision technology, let’s talk about the things that you should absolutely never do.

Highest up on the list is exposing your night vision devices with an intensifier-tube to bright light or the day. That could seriously damage your equipment, and in some cases, totally destroy it.

Also, make sure to always take out the batteries when the devices are in storage or transport. Don’t drop or excessively shake the equipment, and don’t touch any of the optical elements with your fingertips.

The last don’t probably sounds like a no-brainer, but we wanted to mention it for good measure. Always double-check and make sure that the device is completely off before putting it away. Leaving it to run for a long time could do serious damage to both the battery and the device.

Even though night vision technology isn’t exactly anything new, and it’s been around since WWII, it’s still really exciting. Tech companies are constantly developing newer and smarter devices that are more precise, and produce better images. So we’re definitely looking forward to future developments.

But until then, you should keep an eye out for CCTV services, and be on the lookout for new tech and equipment. By signing up for our newsletter, you can stay in the loop, and plan your next steps much easier.