Police arrived at the scene of the Oslo shooting within minutes to find two individuals dead and twenty others wounded. Authorities are investigating the grave incident near a London Pub and popular LGBTQ+ venue as an act of terrorism.

As the media reports, police received multiple calls about a shooting at 1:14 a.m. local time. Paramedics arrived on the scene to take eight other victims to the hospital.

Naturally, when the gunman started shooting, people either threw themselves to the ground or ran for safety.

According to the police, they apprehended the male suspect within three minutes of their arrival. Eyewitness accounts reveal the suspect removed a gun from a bag and immediately started firing. Police say they seized two weapons: a pistol and an automatic rifle. 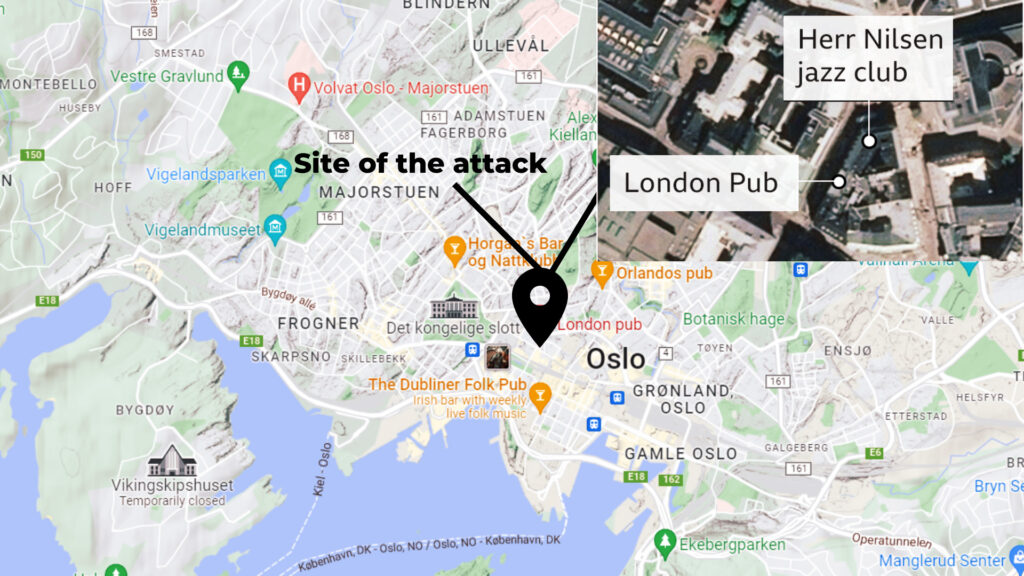 Norway’s domestic intelligence service reveals that the suspect is a Norwegian citizen but originally from Iran. Moreover, this is a man “known to the police,” who has until now received only “minor convictions,” prosecutor Christian Hatlo told the media.

Oslo’s police district states: “There is reason to think that this may be a hate crime.” Likewise, the Norwegian Police Security Service (PST) declared that they are “…working to clarify whether more acts of violence may be planned.”

“We do not currently have any indications of that,” the PST said. Regardless, the nation’s annual Pride parade was canceled on Saturday following the deadly Oslo shooting.

A Nation on High Alert

The security service has raised its terror alert to the highest level. That is most to do with the targeted nature of the attack. In fact, Roger Berg, the acting PST chief, declares that the country is to raise the terror alert from “moderate” to “extraordinary.”

Interestingly, the nation’s intelligence service knew of the perpetrator’s mental health issues, having spoken with the suspect last month. They, however, did not consider him to have violent intentions. Why? Well, that’s difficult to work out.

We know that three motives drive active killers to do what they do: anger and revenge, psychological and emotional conditions, and ideology.

In this instance, the killer’s motive was rooted in two of the three, ideological (considered and noted by authorities since 2015 as a “radicalised Islamist”), and he was known to suffer from mental illness.

Places like houses of worship, gay bars, and other venues that attract like-minded people will always be targets for idealists with a predisposition to violence and whose opinions and beliefs differ from their would-be victims.

A 2012 report conducted by the police after the gravest terror attack executed in Norway determined that had prevention measures been fully implemented, such a deadly incident could have been prevented.

The Norway attack is one of the deadliest incidents to devastate the Norwegian society.