From the Triangle to the Quadrant of Vehicle Security

Any risk analysis begins by setting the context, which leads to defining the criteria and the structures. That is how our safety relationship with tools and technology started. And vehicle security is an inseparable part of it. For example, at the beginning of the 19 century, the working conditions were so severe that around 50% of industrial workers died in their early twenties.

There is some consensus about improving the safety in the industries related to creating the International Labour Organization (ILO) in 1919, and its initial efforts condensed into nine conventions and ten recommendations.

The initial context for this conversation is The Safety Triangle: Man-Machine – Environment system from a safety perspective (Figure 1). It is based on these components and their interrelations; what harm can happen, when, where, how, and why?

The previous representation was essential for the transportation industry and vehicle security when defining The Driving System. It is also known as the driving environment (figure 2). This is a framework that many use in multiple areas of the automotive industry, such as design, development, and manufacturing.

In the early 1970s, Tony Scotti, founder of VDI (Vehicle Dynamic Institute), redefined the previous concepts for applying them to security.

He developed the actual concept of The Security Driver Triangle (Figure 3) to describe the driving components from a protection standpoint. In other words, he was providing an analysis and action framework for crime prevention in the segment of automotive secure transportation.

No training for security drivers or evasive/defensive driving has a good start without this basic concept from Tony Scotti. Likewise, no security plan or route analysis is solid without the fragmentation of the three components and their interrelations in a specific scenario. 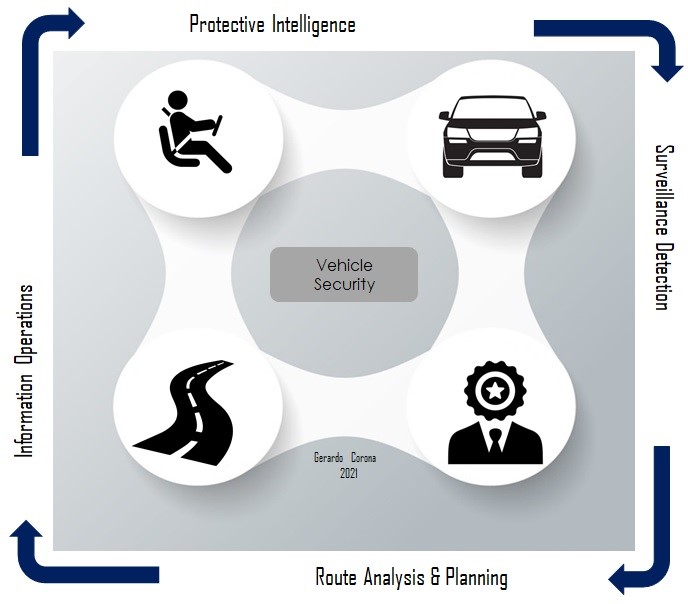 Mainly for HRE (high-risk environments) and high-risk VIPs, we consider the evolution from The Security Driver Triangle to the Vehicle Security Quadrant.

The main characteristics of an HRE include:

In third-world countries, high-risk environments are often the territory of what we call: Criminal Insurgency.

The complexity of operations in these places poses the revision of The Safety Driver Triangle that includes three elements in a physical dimension:

This happens through an iterative framework of vehicle security (quadrant).

The Physical and Informational Dimensions

The framework includes passengers as active elements and presents an informational dimension in addition to the physical one.

The model unravels at two levels under a simple method, such as the Deming Cycle (PDCA: Plan, Do, Check, Act).

The quadrant should go as deep as possible in the two dimensions: Physical and Informational.

This is the addition to the triangle. The VIP or the security specialist on board plays a decisive role in the survivability before, during, and after the attack.

The Passenger and Driver, Explained

For example, there is a low probability of flying unhurt from a killing zone in a solo practitioner configuration without a secure connection between the driver and the VIP. If the passenger does not follow and/or complement the driver’s reactions, the probability of failure is high.

Vehicle security in executive protection is crucial because it is the most probable killing zone. Therefore, it cannot be only about a quiet ride in an armored vehicle and a driver attending one training per year.

Sign me up!
Share
Facebook
Linkedin
Previous articleHaiti in Chaos: A Group of Assassins killed Jovenel Moise
Next articleThe Things You Should Know About Covert Operations