When Bodyguards ‘Tell All’ — Slippery Slope with Discretion

Discretion is a word that carries with it both negative and positive connotations. What does it mean to be discrete as a security professional? Most often, it has to do with protecting groups and individuals in precarious contexts.

On the other end of the slope, there are operatives taking unfair advantage of circumstances for selfish gain. And unsurprisingly, when it comes to confidentiality issues within the security sector, most stem from professionals doing celebrity protection.

Just last week, Mike Tyson’s confidante and ex-bodyguard made the news for exposing the boxing champion’s intimate secrets and fears. The topic of interest involves Tyson’s despair of going too far during boxing rounds and the necessary pre-fight rituals he did to combat this. Now the entire world is privy to the fact the heavy-weight champ urgently needed sex right before a fight to disengage the tension within.

According to Tyson’s ex-bodyguard, getting laid helped the champion to release the tension. Recalling the ringside romps, the former bodyguard and chauffer’s role was to organize these carnal activities. In other words, his job was to station girls, or so-called ‘groupies’, in the bathroom and changing rooms, ready and waiting to have sex with Tyson.

As the media report, it’s a ritual of fornication born out of the star’s crippling anxiety and despair of not feeling good enough. And by all accounts, the approach has worked because Mike Tyson, now 55 years old, never did kill a single person in the ring. 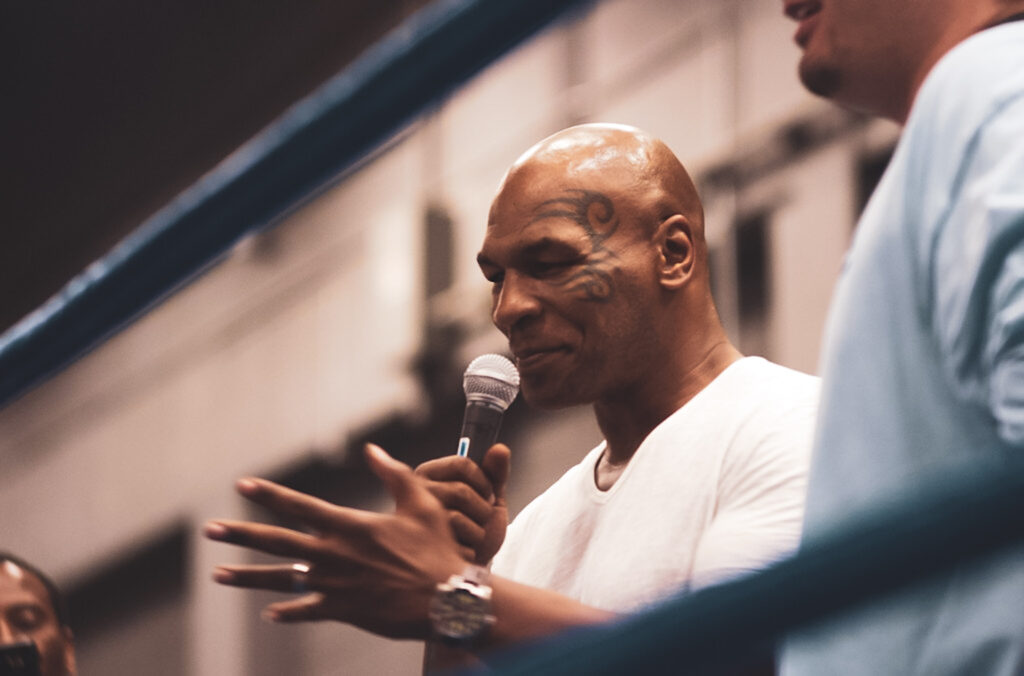 That’s all well and good. However, the major issue here is whether bodyguards break oath by sharing such private information? Discretion in this field is vital. Especially since they accumulate this knowledge while on the job.

A good CPO is one you can depend on, meaning they are reliable and worthy of their principal’s trust. For example, at times an agent exposes to activities the client would rather be kept under wraps — anything from medical problems to relationships that others aren’t privy to.

Regardless of being in possession of secret information, it’s not the place of the agent to divulge anything about their client.

The job of an EP agent is to act as a protector and confidant. An important skill a protective detail needs is the ability to be discreet. Discretion is the skill of keeping secrets and not disclosing information to people who shouldn’t have access. You are someone the principal is able to speak freely to without worrying about where this information will end up.

Upholding the Code of Ethics

These days, confidentiality is a hot topic that raises a debate anytime it’s laid on the table. Almost everybody has an opinion on whether or not it’s acceptable for security professionals to go around dropping clients’ names in public. However, a detail usually signs a strict confidentiality agreement.

Even if the client is fine with the bodyguard posting pictures of them together on social media, they hire an agent to protect them, not take endless photos. Therefore, the CPO or bodyguard has an ethical responsibility to their client.

Saying that this is wrong has nothing to do with being jealous of the clientele of other operatives. It has everything to do with risk assessment and how it affects a client’s safety.

“Introduction to Executive Protection” by security author Dale L. June provides an extensive code of ethics and set of conduct guidelines. According to June, a specific code of ethics outlining the character and reputation professionals should adhere to is what guides the executive protection industry. In addition, the expectation of service goes far beyond that of most other positions.

The principal’s life may depend on the righteousness and professionalism of the EP agent and whom the client has entrusted to ensure their safety. The reality is, there needs to be a professional barrier, and always. Whatever personal feelings they have, an EP specialist takes an oath to maintain the set and prescribed standards that their position demands.

But this can stretch beyond the completion of contractual obligations. Even when an agent finishes work for their client, there is no free pass to divulge intimate secrets or disclose private info to people who shouldn’t have access.

For A-list clientele, hired protection is a necessary part of their entourage. But, sometimes the relationship between the protector and protectee turns sour, testing the existing professional barrier. Such is the case with Justin Bieber and Britney Spears whose former bodyguards chose to sue them. Former bodyguard to pop star Bieber accused the singer of attacking him at a concert, thus enthralling him in a legal dispute. 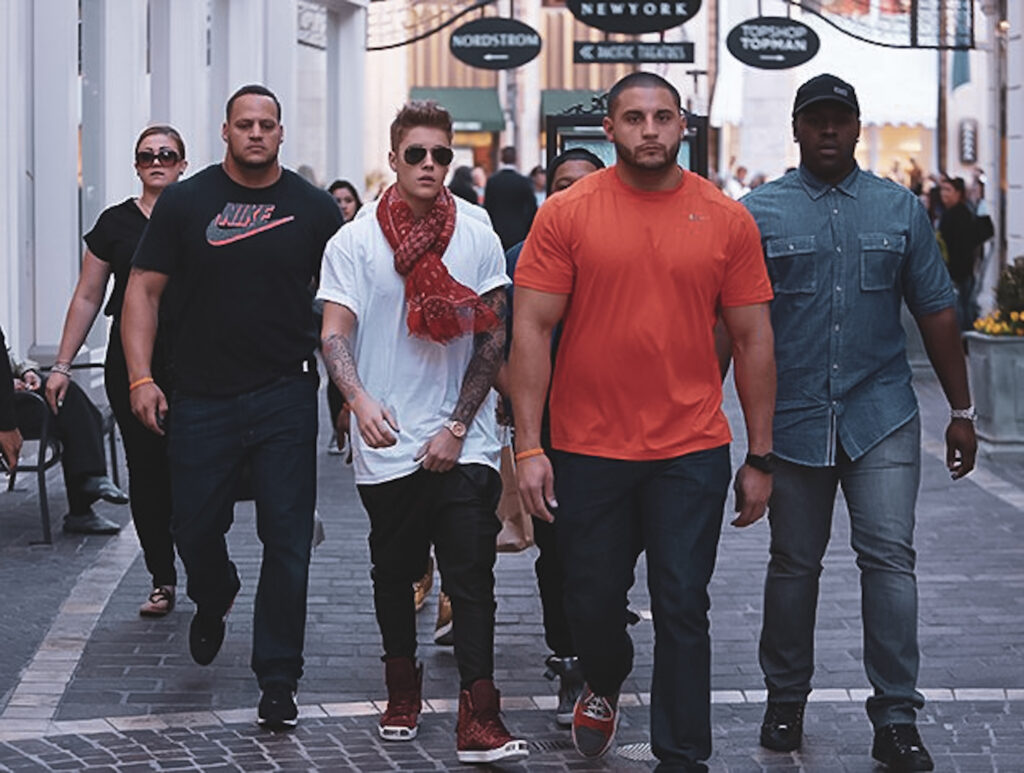 A former bodyguard for Spears divulged disputable allegations for the FX docudrama Controlling Britney Spears. This ensuing controversy dragged the reputation of both Spears’ father and the security company hired to protect the pop star. But not only that, adding insult to injury, these private voice recordings and texts concerning Britney went on show for the world to see.

Of course, the circumstances above don’t paint a pretty picture. But the reality is that these kinds of things happen from time to time. If a high-profile client is busted in an incriminating circumstance, some bodyguards will breach the confidential details of their principal’s lifestyle. Whether it be in the hopes of a high pay-out from the tabloids or fame.

Sadly, there are ‘buddyguards’ out there, posing as protective agents who only really care about status and a claim to fame. Nothing more. And certainly not about the safety and well-being of their clients.

When a situation calls for it, where does an agent with a conscience draw the line between legality and discretion?

For this reason, it’s necessary for agents to think ahead of time about how to safeguard themselves from being placed in a situation where illegal or immoral requests are made. Ultimately, an agent will be forced to make difficult choices. Worse still is that no ‘get out of jail free card’ exists, even for employers of the famous.

You may be held accountable and find yourself in legal trouble if you don’t make it clear what you will and won’t do for the celebrity. As such, adopt a proactive approach by establishing a personal code in advance. By this we mean — know what your standards are to work in this business and stick to them.

The ethical code for CPOs boils down to a single concept — the protection of the client comes before all else. That’s why executive protection operatives are to be aware of all security protocols and any potential “gaps” that may exist.

Security personnel for high-profile people has access to vital information that needs to be treated with confidentiality. Without discretion, you risk leaking important data — whether unintentionally or purposely — and putting the client in harm’s way.

In the executive protection industry, your social media presence and professional behavior will be judged accordingly. No matter who the client is (or was).